Biomass-fuelled power plants in Córdoba, Spain benefit big time from Alfa Laval dry coolers – providing big savings on water and maintenance. Biomass is now the fourth biggest source of energy worldwide, popular for creating value from what has traditionally been seen as waste – or even a cost and a burden. But the real story usually lies not in the mere use of biomass, but in how effectively this is done and the accompanying environmental impacts – both direct and indirect. 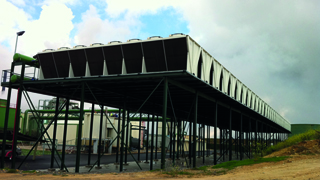 In Palenciana in Córdoba, one of the southernmost provinces of Spain, Vapor y Electricidad El Tejar S.L. (VETEJAR) operates several biomass power generating plants. These biomass plants burn alperujo – the residue from the production of olive oil – sourced from VETEJAR’s parent company (a nearby agricultural cooperative named Oleícola EL TEJAR) in a fluid bed boiler. To provide the cold water required for the shell-and-tube turbine condenser, there was originally a conventional cooling tower. 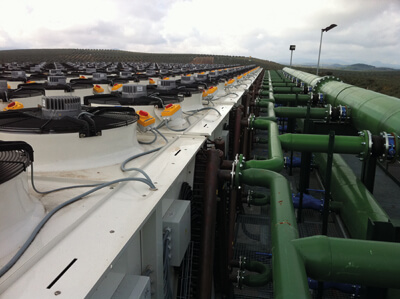 Unfortunately, however, the rapid pace of industrial development in the region meant that demand for water was outstripping supply from the two local wells that the VETEJAR power plant was using. Not only was this a problem in itself, it also forced the plant to concentrate the cooling tower cycles more, as well as using increasing quantities of chemicals. This in turn resulted in increasingly expensive effluent management challenges associated with the cooling tower.

From cooling towers to dry coolers

Faced by escalating water shortages, and well aware that this situation was never going to improve, the management of the VETEJAR plant could see that something had to be done.

Discussions with Alfa Laval specialists about the best solution resulted in installation of a pilot-scale installation with six dry cooler units at the Extractora El Tejar plant.

The dry coolers employ world-leading Alfa Laval heat exchanger technology to cool a closed water circulation  loop. The cooling water is then used to condense the steam from the steam turbine, as well as to cool auxiliary installations in the power plants, such as turbine oil, pumps, generators, etc.

The small-scale pilot installation proved a marked success, resulting in a decision to specify this Alfa Laval solution on a larger scale at two much bigger installations. One is at the Agroenergética de Baena plant, featuring 32 dry cooler units for condenser cooling and 6 units for cooling auxiliary equipment. The cooling towers in this plant only run during peak summer temperatures.

The second is at the VETEJAR plant, where 33 Alfa Laval units completely replaced the traditional open cooling towers for main condenser cooling. These two installations have dry cooling capacities of 46 MW and 26 MW, respectively. For the VETEJAR plant, Alfa Laval delivered 33 Alfa V dry cooler units (VDDS808C) mounted in parallel with an adiabatic spray water system. This system works during the summer temperature peaks, combining the advantages of dry cooling and cooling towers.

In both installations, dry cooler units are equipped with electronically controlled motors that can be programmed by a networked computer or a remote signal. This means they have the big advantage of only consuming as much electricity as is needed at each particular workload point, which considerably reduces their overall electricity consumption.

Replacing cooling towers with dry coolers has made it possible for VETEJAR to reduce its annual water consumption by 80–85%. This is an important achievement in a region suffering from limited and dwindling water supplies.

A second major benefit of this Alfa Laval dry cooler setup lies in the big rollback of maintenance requirements – and costs. According to maintenance manager Juan José Reina, hardly any maintenance is now required, whereas in the past both maintenance and checking were virtually a daily requirement.

In addition, chemicals are no longer needed, making the installation much safer for workers. Fewer inspections are needed, and there is no longer any need for costly, time-consuming sanitization procedures. All in all, this means significantly less risk of plant downtime and important savings on operating costs, along with fewer practical problems in the day-to-day running of the plant cooling system.

The Alfa Laval solution has meant a radical change in our daily work. In fact, I sometimes even get a bit cross with my workers because they feel they do not even need to check the dry coolers, because these units always work well,” says plant manager Victoriano Yust.

According to Victoriano Yust, the biomass plant fitted with the Alfa Laval dry cooler installation is able to operate at full load with no performance reductions compared with its previous traditional configuration.